Re-boot of 'Buttons for Big Grace'

I first published this blog entry in 2008. I thought it was going to be a short-term project, to honor my Mom. But a 'button obsession' took hold, and I am still making those buttons! 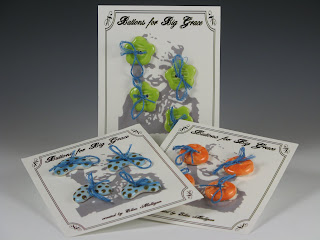 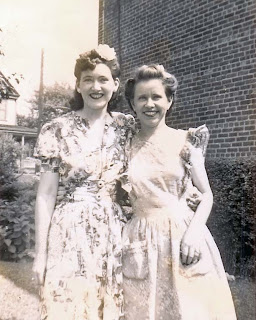 In this photo, my mom, Grace Higgins, is pictured with her sister, Rosalie, to the right. They are two very stylish young women, making due with limited means during the war. Note the flower in my mom's hair!

I have been vacationing in Narragansett, RI--right by the ocean. And while I was relaxing, I was organizing the buttons I have been working on all summer, making them into sets, picking out vibrant-colored embroidery thread and sewing them onto cards I had made with my mom's image on them. I am getting them ready for their 'debut' at the Peters Valley Craft Fair, taking place in September. Click here to get further information. I will be joining the New Jersey Potters Guild, along with Itsuko, Sandy and Susan.

These buttons were a summertime obsession. They are in honor of “Big Grace,” my mom, but never called that to her face – my petite sister is also called Grace.

My mom was brought up as a Bronx “princess.” She sewed all of her own clothes – dazzling outfits! One I found in the attic was a marine-blue bathrobe-styled coat with matching palazzo pants with a Hollywood waist (mom’s description). The shirt matched the lining of the coat – a bright red rayon printed all over with palm trees. I put this outfit on and felt like a bona-fide movie star! This was one of many, many outfits, some with matching hats.

All this glamour was left behind, regretfully, as my mom had six kids. She was widowed at a young age, 47, and had a bedridden mother in the living room. So the talent for sewing supported the family. The prospective brides, bridesmaids, mothers-of-the-bride, cocktail hostesses, cruise ship vacationers, and even nuns came in for fittings – she did all of the new, shortened habits for the local convent in the 1960’s.

As a child I was surrounded by the trappings of all this – beautiful tweeds, shimmering satins and silks, and buttons, buttons, buttons! There were the buttons covered with fabric that matched the outfits, the standard white shirt buttons, the fancy mother-of-pearl buttons, even ones with sequins and rhinestones!

We were able to play with the cookie tin filled with the odd buttons. These were boring sets, ones with no match, or ones not suitable for fine garments. But there were also those jars of real beauties, not to be touched.

When I was starting to work in clay, I asked Big Grace if I could borrow some buttons, to make stamps out of them. She resisted, out of habit, I think. But finally she relented and let me loose. I went carefully through the jars, looking for those unique patterns, collected from the many trips to the notion district in NYC – off 7th Avenue, just north of Macy’s.

I found a few choice ones and proceeded to make impressions in clay. To my horror most of them dissolved! Who knew what they were made of? But I was able to salvage a few and made some great stamps that I use to this day to impress my work in porcelain.

So my tribute to Big Grace is these buttons. There are 100 cards, with her image, of all varieties – colors, patterns and textures. The hardest part was stopping! But I had to control this obsession, and move on.
Posted by Ellen Mulligan at 5:45 PM No comments:

While Ellen Mulligan is gallivanting around London, England (we miss you Ellen, but have a spot of tea for us!) - Itsuko Ishiguro, Sandy Pancrazi and Cynthia Shevelew will be selling their work at the POTTERS GUILD OF NJ show - see below for details!

Highlights: This increasingly popular event draws hundreds of customers from throughout New Jersey and the tri state area.  Available for sale will be a fabulous selection of vases, wall pieces, pitchers, teapots, platters, casseroles, raku and pit-fired vessels in varying colors and styles, and one-of-a-kind sculptures and decorative objects of art. The show is the perfect place to find a unique item or gift.


Go straight ahead to the church on your left.
Posted by Cynthia Shevelew at 2:52 PM No comments:

We will be showing and selling our work, along with Susan Bogen, Allan Drossman and Ted Whittemore, who is joining his fellow Underground Potters after a bit of a break. 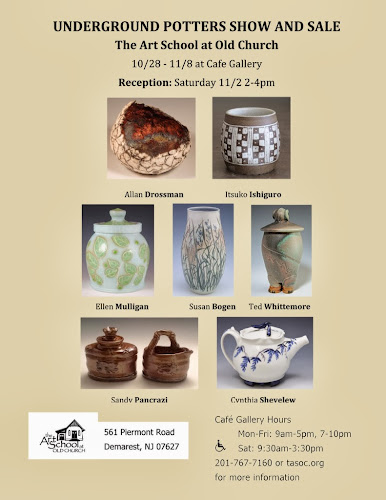 We all attended classes at The Art School at Old Church in Demarest, NJ for years.

While there we started the group 'Underground Potters' to learn together how to present our work, and learn from each other's experience. That first show was in 2003, and we get together every year to show and share our work again.
It has been a wonderful experience for all of us, and The Art School , has been very welcoming. It is a great place, home to the annual pottery show curated by Karen Karnes. That show will be held again, for the 39th time, this December 6-8th, and should NOT be missed.

But back to our show. Please stop by for our reception on Saturday, November 2nd. We will all be there. The pots will be there for sale from October 28-November 8.

Posted with Blogsy
Posted by Ellen Mulligan at 2:32 PM No comments: 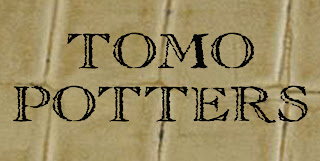 Posted by Cynthia Shevelew at 11:23 AM No comments:

Fresh from the kiln, my new service for 8 are now in my kitchen cabinets! Unlike my typical work - my "Danish Modern" tendencies are exposed. TIME FOR LUNCH! :D 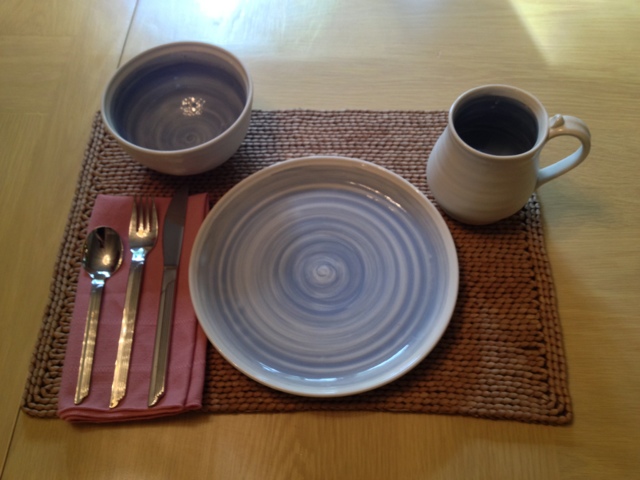 So I spent a lovely day yesterday with my family, it's very special to have everyone over in the spring, with plenty of beautiful flowers and lots of pots to show them in:

Can you tell that I am starting to enjoy Instagram? those filters are great...


We had a nice meal, followed by some great desserts from Trader Joe's, on this year's plate:

The plates are available in my long-dormant etsy shop. Take a look, I will be adding more items...

And Mimi, this is info is for you - I use my hump molds for plates, the curve is gentle enough for a slab plate without a foot ring, but this year I opted to add one. Thanks for reading!
Posted by Ellen Mulligan at 9:23 AM No comments:

Mother's Day is right around the corner -May 12th- and I have been planning the plate for this year's celebration.


Every year we have a family party, and I have been trying to include all the handmade ceramics that I have collected over the years. I have wonderful plates by Mark Shapiro, Richard Aerni, Linda Christianson, Ayumi Horie, Aysah Peltz, Todd Walhstrom, Jody Johnstone, Paul Heroux, Sam Taylor, Scott Goldberg, Bernadette Curran, and others....but I have a nice, big Irish family. We had no dessert plates - a total necessity! So back in 2009 I started making dessert plates, and everyone gets to take home their dirty, sticky plate...I wrote about it here.

I have been working on this year's plate, using the same size and glazes every year, varying the form and the decoration. This year the plates are square, formed on a hump mold, with a foot ring added. 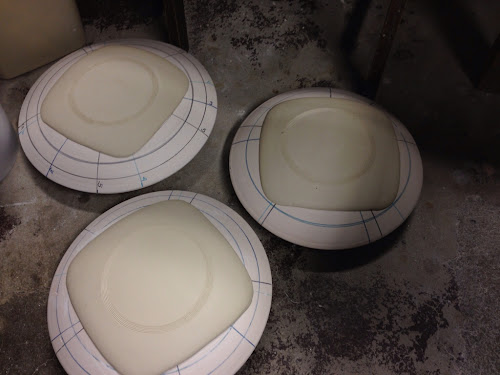 When rolling the coil for the foot ring I mark the lenght in inches on my table...time saver! 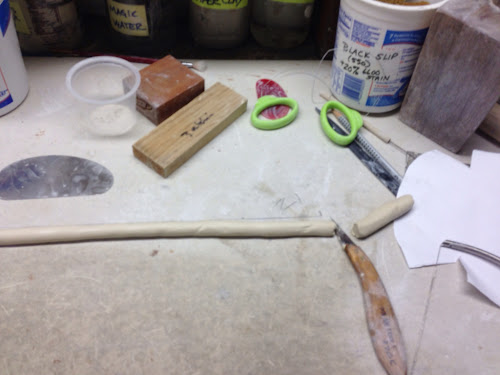 On my template I mark the pounds I need for the slab, and that length for the coil footring. 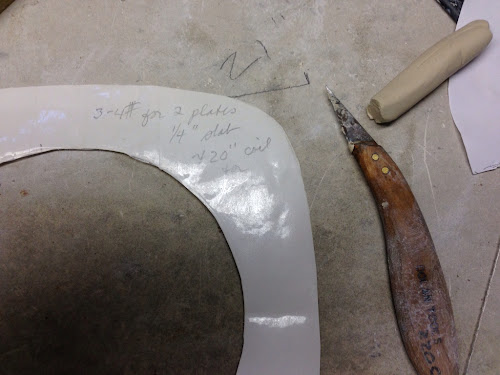 I have finished the glazing, and just added the decals...soon, soon, soon! 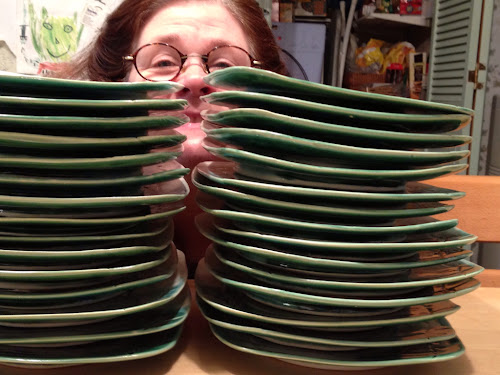 Posted with Blogsy
Posted by Ellen Mulligan at 8:59 PM 1 comment:

You can send us a message anytime:
tomopotters@gmail.com